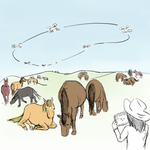 Behavioural synchrony among individuals is essential for group-living organisms. It is still largely unknown how synchronization functions in a multilevel society, which is a nested assemblage of multiple social levels between many individuals. Our aim was to build a model that explained the synchronization of activity in a multilevel society of feral horses. We used multi-agent based models based on four hypotheses: A) horses do not synchronize, B) horses synchronize with any individual in any unit, C) horses synchronize only within units and D) horses synchronize across and within units, but internal synchronization is stronger. Our empirical data obtained from drone observations best supported hypothesis D. This result suggests that animals in a multilevel society coordinate with other conspecifics not only within a unit but at an inter-unit level. In this case, inter-individual distances are much longer than those in most previous models which only considered local interaction within a few body lengths.

Cite this recommendation as:
Brenda McCowan (2021) Feral horses synchronize their collective behavior at multiple levels of organization. Peer Community in Network Science, 100001. 10.24072/pci.networksci.100001
Conflict of interest:
The recommender in charge of the evaluation of the article and the reviewers declared that they have no conflict of interest (as defined in the code of conduct of PCI) with the authors or with the content of the article. The authors declared that they comply with the PCI rule of having no financial conflicts of interest in relation to the content of the article.

I believe that the authors have done a great job of addressing the first round of comments from myself and the other reviewers. I have no further comments to add, and now recommend the manuscript for publication. Congratulations to the authors on a very interesting study!

Version of the preprint: 1

I have received three reviews for your preprint. All reviewers found your preprint very interesting and well-written. Yet each of them also provided suggestions that will enhance the quality of your article. Please take these comments into consideration in your resubmission. Also please carefully review for appropriate grammar and typos throughout your preprint.

Thank you for choosing PCI Network Science for your preprint. I look forward to seeing a revision of this interesting and innovative article.

This study compares an empirical data set on a feral population of horses with simulated data from multiple agent based models to ask whether behavioral synchronization in a multilevel society can be described by a simple model, and whether this model must include the network of social relationships to accurately describe the pattern of synchronization observed. I think the study is well-designed, the hypotheses behind the different models make sense, and the measures of behavioral synchrony (e.g., number of individuals switching from one state to the other) are appropriate. Some aspects of the sampling process for the empirical data could be clarified a little more (see specific line comments below). For instance, behavioral data were obtained using aerial drones which took photo or video scans of the entire herd, and it is unclear whether a validation process was done to verify that e.g., a horse described as ‘resting’ in the scan image was truly resting according to an observer on the ground. I really like the inclusion of a social network into the agent-based models to investigate the potential influence of social relationships on behavioral synchrony. I think those familiar with network analysis would like to see additional information about these networks, such as density of the association networks generated for each scan observation or how many components were in each network (if not a single connected component). Finally, there are grammatical errors throughout the paper that cause some confusion about the authors’ meaning, particularly in the Discussion section, which could benefit from revision. I have made some suggested revisions in the line comments below, but this was not possible for all such occurrences.

Line 120: Please explain further the definition and calculation of ‘zones’. Because I am unfamiliar with such analyses, I am a little concerned that when the authors say that they calculated “…distances between all pairs of individuals in the same zone” there are some pairs that occur in different ‘zones’ yet their inter-individual distance would still be relevant to calculate. A definition of zones could potentially clarify this.

Line 121: Were different times of day over-sampled relative to other times of day? Although the Supplementary files show that an analysis was done to see if horses’ behavior differed according to time of day, the additional information about level of sampling per 30-minute interval would also provide helpful context.

Line 131-132: I don’t quite understand what was done with the histogram of the inter-individual distance data. What is meant by “…from the distance data to the shape under the R environment”? My guess is this examination of the data was performed in R or RStudio (the ‘R environment’), but it seems like some words are missing from this sentence.

Line 143: What is an ‘unconnected component’? Is this a typo and the authors meant to write ‘connected component’ or is there another concept being applied here? Also, the authors say that pairs of individuals were considered to be associated when they were part of the same unconnected component. What is the different between being ‘associated’ and identifying ‘social relationships’?  Is being ‘associated’ only needed to determine which individuals in the herd were isolates in the network graph, and it should not be conflated with what defines an edge in the network?

Line 156: Shouldn’t this say “…in our case, a scan every 30 minutes…”? Because a single scan was not 30 minutes in duration, but spaced 30 minutes apart. The duration of the (drone) scans is noted to be 4 minutes and 24 seconds on average.

Lines 115-118 and 159-164: Did the authors validate that their assignment of resting vs. moving, as captured in the drone photographs, was correct?

Line 159: How many of the scans/ observations did not include 90% of the units (and were thus omitted from analysis)?

Lines 164-167: I don’t fully understand how these phases were defined. Please revise these sentences.

Line 310: Revise to read: “…how many individuals changed state…”

Lines 323-324: Revise grammar; for instance: “…horses live in a multilevel society and are therefore expected to show social cohesion and behavioral synchronization.”

Lines 370-372: Maybe rephrase a little here. Perhaps something like “…better matched the empirical data than the null model (model A), whereas…” The phrasing ‘showed better results’ is a little imprecise.

Line 385: I assume you are comparing the observational data to the model simulation data when you say “The observation data had higher intra- and inter-unit synchronization…” but this should be made clear, and if so, are you referring to ALL models? However, I am not sure what is being compared in the following lines (i.e., “number of individuals changes state…” is higher than what?)

Lines 385-400: Grammatical revisions are needed to clarify what discussion points and conclusions are being made. This paragraph is confusing as it is currently written.

Line 406: Could this not have been examined in the agent based models? Can the parameter settings, or the design of the model for agents’ behavior, be changed to allow the agents to ‘see’ only the other units that are closest to them, such as implementing a certain distance radius around an agent?

The authors propose a very interesting approach using a multi-agent model tested on several underlying social networks in order to identify the social structure that is most likely driving synchronization behaviour in feral horses. The hypotheses taken to generate social networks and the different aspects of the model are well grounded as well as the data anlysis conducted to analyse the correspondence between the models results and the empirical data. Those latter, based on drone observations are particularly promissing (despite the "low" autonomy of the drone) and the results are quite convincing.

The few remarks (below) I have are rather a consequence the inspirations i had reading the paper, rather than real criticisms about the approach and the methodology that are very convincing to me.

A first remark concerns the term synchronization, as having in mind models like the synchronization of fireflies it is maybe a bit misleading and the current case corresponds rather to a more global case of social influence. But if the term is the real one used in this particular field, I would totally accept it could be a seen as a synchronized process at a larger time scale.

A second one is rather a perspective about the global method concerning the generation of social networks that is quite classical in the field of animal networks study. The point is that using spatial distance to generate networks you can not really distinguish in between a spatial influence and a social one. This is not totally the casee there as the different social networks tested enable to fill a gap in between the two options. However, one possible solution (and it is maybe the one tested there but it is not totally clear) would be to use half of the dataset in order to generate the social network and once generated to use the other half in order to test the different hypotheses. Such option would be in particular interesting when using directed relationships rather than bidirectional ones, trying to capture a single sided influence especially introducing the perception of the individuals that is oriented (therefore a symetric relation would correspond to the case where two horses are standing face to face).

A complementary approach that could potentially shed a different light on the system concerns the analysis of the evolving social network in particular concerning the evolution of the social communities identified along time.

No user comments yet
Log in Register
Submit a preprint