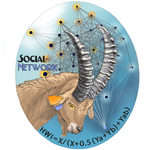 A social network of bucks

How do social networks change over the long term? What features are more stable? Are there individuals that maintain their position? What factors determine this? These are the questions that Brambilla et al. (2022) successfully address in their manuscript, for a network of male Alpine ibex (Capra ibex) in the northwestern Italian Alps.

While it is widely acknowledged that animal social networks are dynamic (Pinter-Wollman et al. 2014) not often can we see analyses of this temporal variation using data sets collected on the same individuals for long periods of time. Brambilla et al. (2022) collected such a data set on individually identified bucks from a wild-ranging population for ten years. Alpine ibex populations are sexually segregated except for the rutting period, which justifies focusing a social network analysis on each of the sexes separately. They also present a low degree of fission-fusion dynamics, forming cohesive groups or spreading over larger areas depending, presumably, on the resource heterogeneity. Taking advantage of the fact that temporary subgroups can be observed, Brambilla et al. (2022) measured the degree of association between individual bucks by the time they spent in the same subgroup. Building yearly networks with links thus defined, the authors were able to analyze the changes and stability of networks across the years.

In all yearly networks, all bucks are connected in a single, giant component, which implies either that subgroups were sufficiently fluid in composition to include all possible pairs of individuals at least once, or that bucks formed temporarily large subgroups that included all of them, at least sometimes. This connectedness of the networks, as well as their high link density, prevailed over the whole study and can be said to characterize buck social networks. Other features, like the degree of centralization, differed between summer and spring networks, but in a consistent fashion across years, suggesting that the degree of resource heterogeneity (which is higher in the spring, when the snow melts only at low altitude) influences the association patterns between bucks.

When analyzing the social network metrics at the node level, Brambilla et al. (2022) found a very clear effect of age, with individual degree and eigenvector centrality increasing and then decreasing as bucks aged. In fact, bucks showed mostly peripheral positions in the network of the year before their death. These results add to the accumulating evidence that age and social position are intricately linked (Sueur et al. 2021). The yearly networks also showed strong homophily by age, with bucks of similar age showing stronger bonds than those of different age, and an opposite effect of dominance rank, with bucks of similar rank showing weaker bonds than those of dissimilar rank.

In addition to the obvious integration of these results to those of the female social networks, including the rutting period, it remains to be studied what mechanisms at the individual and behavioral levels could lie behind these patterns: are individuals of similar age also similar in their nutritional requirements? Are they more familiar with each other because of spending time together since young? Are older individuals unable to invest in maintaining social relationships and therefore displaced from more central positions in the network? Are similarly ranked individuals more likely to enter into conflict and therefore avoid one another? Does personality influence patterns, beyond dominance rank or age?

These are open questions that result from a solid study, which counts as its strengths the longitudinal data set, rigorous methods for analyzing networks at the global and node levels and for statistically testing differences and similarities between networks at different points in time and a nicely written literature review with a broad taxonomic scope.